Ben and Becky Saer had fertility treatment for over three years in the UK. Then, with their savings as low as their morale, they found an affordable IVF clinic in the Czech Republic. This is their IVF success story.

Becky Saer, founder of Your IVF Journey, talks about her battle to conceive and her IVF success story using donor eggs at a renowned clinic in the Czech Republic.

“Ben and I met in our late thirties and were married within six months. It was a truly wonderful time for both of us. Like many couples, we assumed that having a baby would be easy. But after two years of trying naturally, I still wasn’t pregnant. We tried hard not to let it affect our happiness but it was very stressful. All we wanted was a baby!

We were initially refused IVF treatment on the NHS because of my age (I had just turned 40). To cut a long story short, Ben successfully appealed this decision. We were allowed three IUI cycles and one IVF cycle for our unexplained infertility. Our IVF journey had begun.

All three IUI cycles failed, as did a fourth private one at a London clinic. We were so disappointed. We knew our chances were low but we kept hoping. A few months later, we had our first full IVF cycle. I was absolutely ecstatic when I discovered I was pregnant. I still remember, and cherish, the intense feeling of relief and happiness. But it was not to be. After five and a half weeks, I started bleeding. A scan at our local hospital confirmed an early miscarriage. We had lost our precious baby.

We cried and cried, feeling angry one minute and despairing the next. We were so frustrated and back in limbo again. Our life remained on hold and we kept asking: when would this all end? But Ben and I were determined not to give up. Four months later, thanks to financial help from my father and Ben’s brother, we were able to afford a private IVF cycle at the same clinic. Despite two good embryos, IVF success eluded us. The cycle failed.

We turned to counselling, which really helped. At the same time, it was dawning on us that endless private IVF cycles would cripple us financially. We also felt that the chances of IVF success, given my ageing eggs, just weren’t high enough. After much thought and debate, we decided instead to go for donor-egg IVF, which immediately quadrupled our chances of success. Giving up the dream of having a baby with my own eggs was painful. But IVF with donated eggs seemed to us a wonderful act of altruism and a sensible next step.

With long waiting lists for egg donors, prices topping £10,000 in some London clinics and the variable standards of service we had experienced, treatment in the UK was not an option. We searched high and low online for the best clinic. Based on cost, IVF success rates and patient feedback on the fertility forums, we chose a top clinic in the Czech town of Brno.

We were very apprehensive. The scans, tests and treatment protocol were daunting, as was the prospect of organising a trip to a completely unknown town in the heart of Europe and synchronising the travel with my treatment. At the clinic, we found the standard of care to be so much better than the UK clinics we had used. The staff were unfailingly kind and attentive and the facilities were immaculate.

Being away from home also helped us relax. We spent seven days unwinding, eating and sleeping well and sightseeing. I had two top-grade blastocysts transferred and, after the dreaded two-week wait, did the test. I was overjoyed. I was pregnant for the second time.

But we were dealt a devastating blow. At the 12-week scan, the sonographer at our local hospital in the UK announced coldly: ‘There’s a problem with this pregnancy.’ A week later, our baby was diagnosed with an extremely rare condition called body stalk anomaly. It was nothing to do with the clinic, the donor or the treatment. We couldn’t believe it. On Christmas Eve, 2011, I had a medical termination at 14 weeks as the prognosis for the baby was fatal.

We held our tiny daughter Elsie in a Moses basket, saying goodbye as we wept. The next six months were the darkest and saddest days of our lives. Very few friends and family knew what to say or do. How could they? They hadn’t experienced repeated IVF failure or unexplained infertility. They couldn’t fully understand how we felt.

Despite our many setbacks, we refused to give up on our dream of having children. That summer, we had our leftover frozen embryo transferred. It was unsuccessful. But in October 2012, we returned to the clinic for a second fresh donor-egg IVF cycle. To my absolute delight, it worked. 39 weeks later, on 15 July 2013, I gave birth to a beautiful, healthy little girl. We have named her Ida.

Our journey didn’t end there. On 7 December 2015, my second daughter, Coral, was born. She came from the same batch of embryos as Ida. Proof that frozen embryos work beautifully.

We wanted another positive thing to come out of our experience. So we decided with the clinic to form an agency to help other couples through the process. As well as arranging and coordinating their treatment, we provide patients with coherent practical and emotional support. We realised how much we needed this when we had our IVF treatment abroad: you need a helping hand. And who better than fellow patients to give it? Your IVF Journey was born. Watch our video here.

I would say to anyone considering fertility treatment abroad to get in touch. As you can see, Ben and I have experienced all the ups and downs of IVF treatment, in the UK and overseas, which some call a ‘rollercoaster ride’. But we were one of the IVF success stories in the end. Fertility treatment is a declaration of love. Everyone we’ve spoken to who has succeeded with IVF says the same thing: once it works, the pain of your journey is overtaken by joy.

We get our strength from that. Our personal IVF struggle has been very hard. But if our experience can help other couples, it will be worth it. 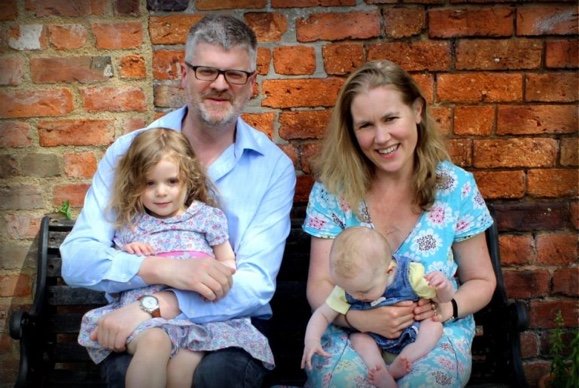